Being A Team Player Redux

I originally posted this back in 2016 and thought it was worth sharing again.  If people would open their eyes, it would be easier to see the backstabbers.  There seems to be one in every team or group. 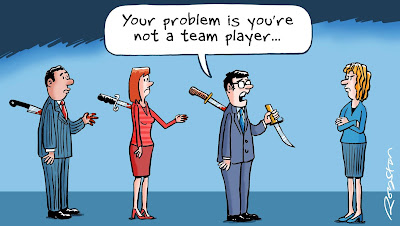 "Most people think of sports teams when you talk about a team player but it also applies to any work setting, organizations, families, and society as a whole.  What is teamwork?  In the words of Vince Lombardi: "Individual commitment to a group effort - that is what makes a team work, a company work, a society work."

What behaviors or characteristics make for a bad team player?  Here are a few that I can think of.

- A team member that shares confidential or sensitive information about other members of their team or situations going on within the team with someone that is not part of the team.  Especially if the goal for doing so is to undermine another member of the team.
- A team member that either cannot or makes no effort to hide their dislike of or frustrations with other members of the team.  When the disharmony becomes obvious to the public, perhaps it is time for that team member to step aside.
- A team member that would rather push aside, ignore, or drive out other team members instead of making the effort to get all members working together as a whole for the betterment of the organization.  Working together as a team requires dedication to the cause, if you can't step up to the task or are not willing to, then maybe you should not be a member of that team.

When looking for new members of a team, these are some characteristics in people that you may want to avoid.

- A person that thinks they are better or smarter than others. A braggart.  Know it all's and braggarts tend to never make good team players, they are a one man show, grandstanders.  If they do become part of a team, they most likely will never be content until they are the top dog, the one running the show.  And they tend to step on anyone who stands in their way.  Know it all's also tend to be some of the dumbest people in the world.  Braggarts also tend to exaggerate the truth especially about themselves.
- A person that says things about others like "We can't control him" or "He doesn't see things our way".  Also things like "I think we have him under control now" and "I think he is seeing things our way now".   Those are not the words of a team player, they are the words of a controlling person that will never be able to work together as a equal with others in a team setting.  It will always be their way or the highway.
-  A person that makes accusations against other people with no facts to back up the accusations, only speculation.  Maybe the basis for the allegations lies within their own goals?  What was their true goal?  If they are willing to make accusations against others with no proof, what will happen when they become part of a team?  Will they continue their ranting, grandstanding, accusation slinging ways within the team?
- A person that inflicts harm on others and then revels in watching their suffering.  Revels to the point that they brag about it to others and want others to join in the revelry in watching another suffer.
- A person that will not admit when they are wrong or apologize for their actions that harmed others.
- A person that wants to be a team player, part of an organization, should be happy for any successes or benefits that come to the organization.  If they belittle or ignore any good events that benefit the entire organization, then it would appear that they don't really care about the betterment of the organization.  Is it  due to petty dislikes or petty jealousies? Is it because they are not the ones who will get the credit?
- A person that belittles another's accomplishments or successes in any situation.  Petty shallow people never make good team players.
- A person that will participate in underhanded, backstabbing, backdoor dealing, ethic violating ways with a goal to undermine and destroy others that are members of a team. If they are willing to do those things from outside the team, imagine what they will do if they ever actually become part of the team?  Team members should be very wary of people like this!!
- A person that sees their own glory, their imaginary fame, rather than the truth about a situation as the main goal or result of their actions.  EX: "My video will go viral"  "I'm going to be on all the national news shows"
- A person that is dishonest.  A person that lacks morals and conscience.  A person that shows no remorse whatsoever for wrongs they have committed.  A person that shows no understanding, no empathy, no compassion towards others."


So Keep Your Eyes Open And They Won't Be Able To Back Stab You!! 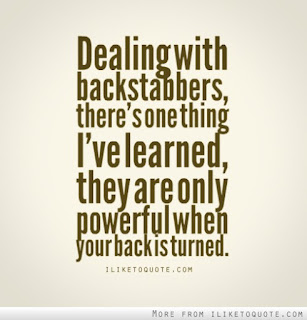 Posted by BridgeportMusings at 10:03 PM

My Heart Belongs To Bridgeport 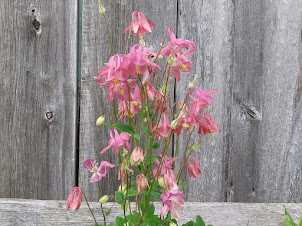 The Bridgeport Township website has finally put a profile page back up for the township clerk.  It was removed around May 7th or 8th.  This... 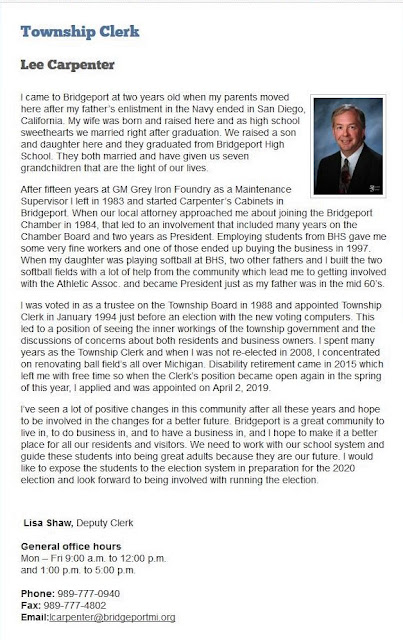